When the Saints Go Marching In...

A moving song by Sara Groves about the Communion of Saints and we are called to
"be in that number" as the saints go marching in.
Posted by Nick at 6:25 AM No comments:

When I was in elementary school everyone wanted to be the line leader. This was the coveted class role to be the first in line, walking ahead of everyone else while they followed behind. As we walked from one known destination to another there was no real leadership or service going on, in fact, line-leader was simply a privilege, a position of honor.
As I have grown older I have realized that being a leader is not about a position in line or letters following a name. Being a leader means being like Jesus, imitating our God who became a servant for us, a servant leader. Can there be a better example of leadership than God who became one of us? Sometimes being a servant leader means setting aside other good things like money, popularity, preferences, my (inherently better) idea or way of doing something so we can focus on how to love God and others better.
Most of the time being a servant leader is tough, it requires us to do what is more challenging: lead by example even if it goes unseen, be humble in successes, face criticism with inner strength, and always be the best version of ourselves, a person of integrity, whether or not other people are living that identity themselves.
We need help being good servant leaders and should look to our family and Catholic community for support and prayer.  We are blessed as Catholics to have as a part of our faith family not just the people we know from Church, but all of the Christians who lived for the last two thousand years and are still living with God in Heaven: the Saints.
On Novemebr 1st the one billion Catholics throughout the world celebrate a great day called All Saints Day. We celebrate the Saints, those heroes and role models who have gone before us, members of our faith family, who lived their lives with great love. Saints are normal people like us who imitated Jesus as servant leaders. Some of them did extraordinary things in their lives, but most of the time they simply did ordinary things with extraordinary love; we are called to do the same thing. The Saints are great examples for how we can live our lives and their example gives us confidence that we can be saints too! It is important that we pray to the Saints who are close to God in Heaven so they can ask God to help us and give us what we need to be saints to.
Questions for Reflection and Discussion:
-What is one concrete way that I can be a servant leader in my life this week?
-What Saint(s) is a role model for me? Why?
Posted by Nick at 6:27 AM No comments:

Who Cares About the Saints? Blessed Mother Teresa of Calcutta

Who Cares About the Saints? Saint Joseph

Who Cares About the Saints? Saint Bernadette Soubirous of Lourdes

Who Cares About the Saints?

I DO and so should all of us!

Check out our Communion of Saints event this Sunday after the 10:15am Mass to learn more about a TON of Saints by our Religious Education youth!
Posted by Nick at 5:57 PM No comments:

Matthew 22: 34-40
We should all memorize part of today’s Gospel:
What is the greatest commandment? "You shall love the Lord, your God, with all your heart, with all your soul, and with all your mind” and “You shall love your neighbor as yourself. “
In his first letter for the benefit of all Catholics (encyclical), Pope Benedict XVI gave us a beautiful reflection on how our God is a God of love and what that means for us as followers of Jesus. Reflecting on the two-fold commandment in today’s Gospel he writes that the “love of God and love of neighbour are thus inseparable, they form a single commandment.” We need both and they mutually enrich and inspire the other.
It is not enough to just to love other people, for, “if I have no contact whatsoever with God in my life, then I cannot see in the other anything more than the other, and I am incapable of seeing in him the image of God.”
But it is also not enough to just sit in prayer and love God, for “if in my life I fail completely to heed others, solely out of a desire to be “devout” and to perform my “religious duties”, then my relationship with God will also grow arid. It becomes merely “proper”, but loveless.”
“Only my readiness to encounter my neighbour and to show him love makes me sensitive to God as well. Only if I serve my neighbour can my eyes be opened to what God does for me and how much he loves me.” (Pope Benedict XVI, God is Love (Deus Caritas), 18)
*Interested in reading more? You can read it here! Check out Part II of Deus Caritas Est.
Questions for Reflection and Discussion:
-How can we love God if we cannot see Him?
-Isn’t love a feeling? How can I love someone who I am mad at or who annoys me?
-Why is it difficult to love others if we do not love God?
-Why is it difficult to love God if we do not love others?
-What are three ways we can love people in our life (be concrete!)? Commit to following through with one of those ways this week.
--What are three ways we can love God? (be concrete!) Commit to following through with one of those ways this week.
Posted by Nick at 9:00 AM No comments:

Where Sin Abounds Grace Abounds All the More!

Check out this great daily email reflection worth sharing from hwww.henrinouwen.org... 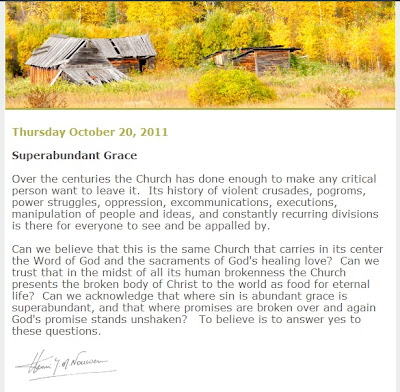 Cyberbullying: What Parents Need To Know And How To Prevent It

Check out this great write-up on Cyberbullying from catholictechtalk.com
If you weren’t aware, October has been National Anti-Bullying Month.   When I hear the word “bully”, it sometimes seems harmless.  I picture that kid on the movie A Christmas Story.  The truth is that it’s not harmless.  In recent years it’s even been taken to another level with technology to what is now called “cyberbullying“.  (I will tell you up front, I am not one to blame the technology.  And it’s my opinion that neither should anyone else.).   Cyberbullying is harrassing, teasing, embarrassing, threatening, humiliating, etc. through the use of the internet and/or digital media.  Is it a serious issue?  Absolutely, and it should not be taken lightly.  We were all kids once, and at that time everything seems like the end of the world and peer pressure can be very overwhelming.  So with 80% of all teens having cell phones today, one embarrassing photo that can spread across an entire student body in seconds can be devastating.  Here’s some staggering statistics from i-Safe, Inc.:
The result of cyberbullying is no less harmful than physical bullying.  It can lead to depression, lowered self-esteem, suicide, becoming bullies themselves, legal issues, so forth and so on.  There is a reason we have slander laws regarding the press.  To protect people from harmful public embarrassment, right?  But part of the problem is that we do not look at the internet the same way.  We are often far too dismissive of the responsibilities of being online, the cell phone we’ve handed over, and the powerful capabilities of the technology itself.  Or we are intimidated by the technology ourselves and don’t feel comfortable talking to our children about it.
So here’s what you can do as a parent to teach your children about cyberbullying and properly using the technology handed to them:
The bottom line is that cyberbullying is an issue, and technology can be very harmful to others when used inappropriately.  Just like any tool we use inappropriately.  The internet and the the technology are very beneficial as well and improving lives everyday so we shouldn’t be so quick to blame the technology.  Here are some links to further resources:

What belongs to God?
In today’s Gospel passage the Jewish leaders are trying to trick Jesus into getting in trouble with the government (Roman Empire) by trying to get him to say that a person need not pay taxes (since paying taxes wasn’t one of the Jewish laws).
Jesus responds by asking them: whose face is imprinted on the coins? When they respond “Caesar” He tells them that they should “Repay to Caesar what belongs to Caesar and to God what belongs to God”.
It is important as Christians for us to live a life of justice: giving each person what is owed to them. But how do we give God what belongs to Him? What belongs to God? We believe that God created the world, every person, and everything. Every day God continues to give us life and love as a free gift. While Caesar’s face was imprinted on coins, the face of God is imprinted on each of our hearts. We are called to give God our whole selves, everything that we are, nothing less. We do this by resembling God in our thoughts, words and actions.
Questions for Reflection and Discussion:
-What is one way I resemble God and share His presence with others?
-What is one way I need to work on resembling God and sharing His presence with others?
-Imagine that the laws of the Government and God’s laws worked together. What would be different here in Mill
Valley?
A Morning Prayer
Dear God, I offer you my prayers, works, joys, and sufferings this day. I believe that I am your beloved Son/Daughter. Help me to be the best version of myself so that I may resemble Jesus and share His love with everyone I see today. Amen.
Posted by Nick at 10:57 AM No comments: