Doers of the word (Benjamin Franklin)

Benjamin Franklin, admittedly a self-avowed Deist, had much of interest to say about Christian worship that is not other-centered:

Faith… has, doubtless, its use in the world.  I do not desire to see it diminished.  But I wish it were more productive of good works than I have generally seen it, I mean real good works -- works of kindness, charity, mercy, and public spirit; not holiday keeping, sermon reading or hearing, performing church ceremonies, or making long prayers, filled with flatteries and compliments, despised even by wise men, and much less capable of pleasing the Deity.  The worship of God is a duty; the hearing and reading of sermons may be useful; but if men rest in hearing and praying, as too many do, it is as if a tree should value itself on being watered and putting forth leaves, though it never produced any fruit.  Your great master thought much less of these outward appearances and professions than many of his modern disciples.  He preferred the doers of the word to the mere hearers;… those who gave food to the hungry, drink to the thirsty, raiment to the naked, entertainment to the stranger, and relief to the sick.

Rituals are about transformation (A. Verghese) 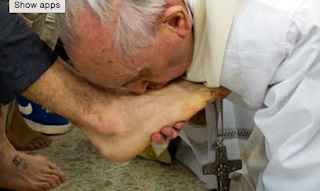 Rituals, anthropologists will tell us, are about transformation.  The rituals we use for marriage, baptism, or inaugurating a president are as elaborate as they are because we associate the ritual with a major life passage, the crossing of a critical threshold, or in other words, with transformation.

How might Dr. Verghese's idea alter our understanding of worship and the Mass?

Image source
Quote source
Posted by OLMC at 6:00 AM No comments: 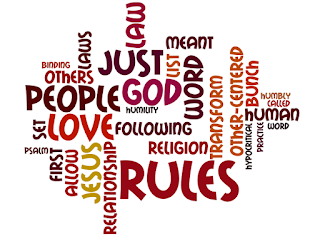 In vain do they worship...
Is religion just about following a bunch of rules?

The Book of Deuteronomy, from which this Sunday's first reading is taken, is primarily concerned with Jewish rituals and the proper rules for celebrating them. When Moses teaches the people to observe a set of statutes and decrees, that list is meant to define them communally, as a people, an identity derived first and foremost from their relationship with God.  Psalm 15 names some of these rules:  the people of Israel are called to walk blamelessly, to embrace the truth rather than slander, to harm or reproach no one… The list is extensive, detailed; more importantly, it is other-centered, promoting a justice that looks always to the needs of our fellow human beings.

By Jesus' time, the law has atrophied into a set of rules that are no longer just or life-giving.  Participating in law of God was meant to bind people to the love of God and the love of other, Jesus tells the hypocritical Pharisees and scribes in Mark's Gospel, whereas their proliferation of human laws tends to generate only ritualistic motions:  in vain do they worship, Jesus says.  Faith is not something we can just do ritualistically; we have to allow it to grow, to transform us; it is ongoing, an evolving process.  And it requires our active participation, starting from a place of other-centered humility.  As the Letter of James notes:  Humbly welcome the word that has been planted in you.  Be doers of the word, and not hearers only.  Care for orphans and widows.

If religion is just about following a bunch of rules, if it is a practice that does not transform our relationship with others, then it is useless and empty.  But if we allow ourselves to be recreated by the Word, we can be channels through which God's love can come into the world, binding us to others and to God in the true etymological sense of the word religare… not by laws or rules, but through love, the greatest law of all.

This post is based on Fr. Pat's Scripture class.
Image source:  Wordle
Posted by OLMC at 6:00 AM No comments: 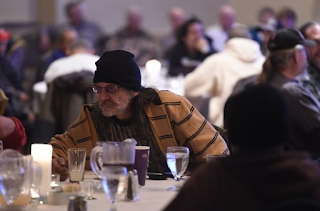 Hot dogs and Communion at the Hope Rescue Mission.  I will also think of the body of Christ now with this scene in mind.  Doctors and housewives and professors in nice shoes and brightly colored sweaters shuffling to the table together with men and women who hadn’t changed clothes for days or weeks.  The sophisticated smell of after-shave mixed with the sharp scent of dirty socks and stale smoke.  People whose lives seemed all together sharing the same loaf with people whose lives were broken and tattered.  We were all one body, for we all ate from the same loaf.

Each comfort we manage... (Mark Nepo) 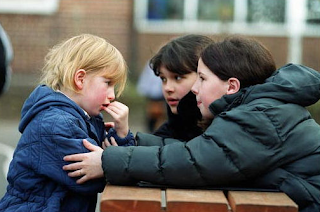 I think each comfort we manage --
each holding in the night, each opening
of a wound, each closing of a wound, each
pulling of a splinter or razored word, each
fever sponged, each dear thing given
to someone in greater need -- each
passes on the kindness we've known.
For the human sea is made of waves
that mount and merge till the way a
nurse rocks a child is the way that child
all grown rocks the wounded, and how
the wounded, allowed to go on, rock
strangers who in their pain
don't seem so strange.
Eventually, the rhythm of kindness
is how we pray and suffer by turns,
and if someone were to watch us
from inside the lake of time,
they wouldn't be able to tell if we are
dying or being born.

--Mark Nepo, The Rhythm of Each
Image source
Poem source
Posted by OLMC at 10:30 AM No comments: