The Transcendence of Triduum I love the celebration of the Easter Triduum –– I wait for it impatiently throughout all the season of Lent.  Triduum is the goal, the culmination, the extraordinary endpoint of our journey through forty days in the Lenten desert.  It is unlike any other moment in the Church’s liturgical calendar – it’s almost like stepping over a threshold, out of chronological time and into kairos time, into a sacred space unique in the depth of engagement it offers, and in the beauty of liturgy that graces it.  Nothing, nothing, is like the Triduum liturgy, three awed days of total immersion, body, heart, and soul, into the Passion, Death, and Resurrection of our Lord.  If you have never participated before, now is the time:  you will never forget this incredible experience of time-out-of-time.

Join us first on Holy Thursday evening for the Feast of the Lord’s Supper and recall Jesus kneeling humbly before his disciples to wash their feet, then blessing, breaking, and sharing bread – the first Eucharist – with his disciples… Process afterwards with us to O'Brien Hall for Adoration of the Blessed Sacrament…

Follow in Jesus’ footsteps on the Way of the Cross Friday afternoon, and venerate the Wood of the Cross in remembrance of his death at the most extraordinary Communion service of the liturgical year…  Friday evening, join Christians from all Mill Valley churches at the ecumenical Tenebrae service graciously hosted by Peace Lutheran Church…

Witness the Light of Christ as it slowly fills Our Lady of Mount Carmel Church on Holy Saturday evening, and hear the story of salvation history, from Genesis to Romans… punctuated with a joyful Gloria that tells us that Resurrection is at hand…

And then, at last, on Easter Sunday, join in the joyful proclamation of Jesus Risen and know in the depth of your being God’s faithful and abiding love….  Alleluia!


Come, be transformed… by Triduum!

Image source
Posted by OLMC at 5:00 AM No comments:

The room grew still
As she made her way to Jesus
She stumbles through the tears that made her blind
She felt such pain
Some spoke in anger
Heard folks whisper
There’s not place here for her kind
Still on she came
Through the shame that flushed her face
Until at last, she knelt before his feet
And though she spoke no words
Everything she said was heard
As she poured her love for the Master
From her box of alabaster

Video source
Lyrics source
Posted by OLMC at 6:00 AM No comments:

To bring a ruined world up with him (C. S. Lewis) In the Christian story God descends to re-ascend.  He comes down; down from the heights of absolute being into time and space, down into humanity… down to the very roots and sea-bed of the Nature He has created.

But He goes down to come up again and bring the ruined world up with Him.  One has the picture of a strong man stooping lower and lower to get himself underneath some great complicated burden.  He must stoop in order to lift, he must almost disappear under the load before he incredibly straightens his back and marches off with the whole mass swaying on his shoulders.

Or one may think of a diver, first reducing himself to nakedness, then glancing in mid-air, then gone with a splash, vanished, rushing down through green and warm water into black and cold water, down through increasing pressure into the death-like region of ooze and slime and old decay; then up again, back to colour and light, his lungs almost bursting, till suddenly he breaks surface again, holding in his hand the dripping, precious thing that he went down to recover.  He and it are both coloured now that they have come up into the light:  down below, where it lay colourless in the dark, he lost his colour, too.

In this descent and re-ascent everyone will recognize a familiar pattern:  a thing written all over the world.  It is the pattern of all vegetable life.  It must belittle itself into something hard, small and deathlike, it must fall into the ground:  thence the new life re-ascends.
--C. S. Lewis, Miracles

Text source
Image source
Posted by OLMC at 6:00 AM No comments: 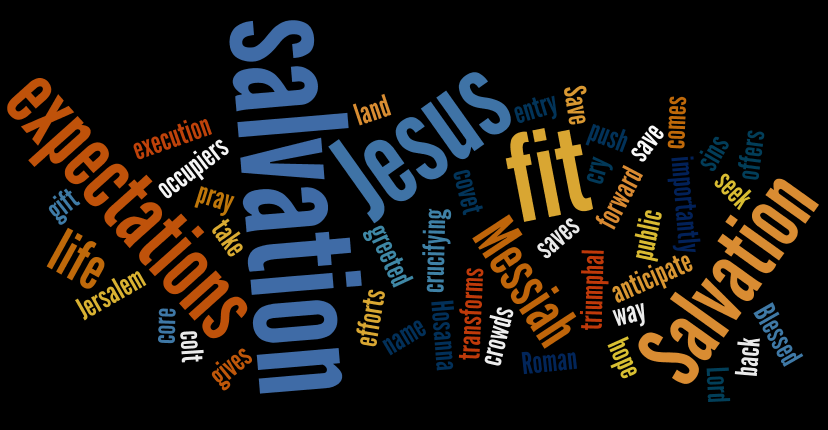 Hosanna in the highest!
Salvation doesn’t necessarily fit our expectations.

During Jesus’ triumphal entry into Jerusalem on the back of a colt, he is greeted as the Messiah by the crowds, who cry, Hosanna!  Blessed is he who comes in the name of the Lord!  Save us, they pray:  they hope for salvation.  And Jesus will save them, all of them, but not the way they anticipate.  Salvation doesn’t fit their expectations.

The salvation that Jesus offers is salvation from sins, not from Roman occupiers – it is the salvation, not of the land they covet, but of their very core.  And he saves, how?  First, by their public execution of his human person:  they seek and take his life; they push salvation forward by crucifying their Messiah.  More importantly, he gives his life, and it is this, his gift, that transforms their efforts.  Salvation doesn’t fit their expectations.


Does it fit yours?

This post is based on Fr. Pat's Scripture class.
Image source:  Wordle
Posted by OLMC at 6:00 AM No comments:

The grain of wheat has to die (Henri Nouwen)

I want to go in many directions, do many things, meet many people, be involved in many situations.  But to be fruitful I have to stay close to the source of life and allow myself to be cut back.
This is something I cannot do for myself; it must be done by the Word of God.  It’s the Word that tells me that the grain of wheat has to die in order to bear fruit.  Maybe it’s first of all a question of becoming attentive to when and where the cutting is taking place, and recognizing these times and places as times and places of fruitfulness.


--Henri Nouwen, Finding a New Way to Get a Glimpse of God
Image source
Posted by OLMC at 6:00 AM No comments:

Brought by your hand to the edge of our dreams,
One foot in paradise, one in the waste,
Drawn by your promises, still we are lured
By the shadows and the chains we leave behind.

Now, as we watch, you stretch out your hands,
Offering abundances, fullness of joy,
Your milk and honey seem distant, unreal,
When we have bread and water in our hands.  But…
Refrain

Show us the way that leads to your side
Over the mountains and sands of the soul.
Be for us manna, water from stone,
Light which says we never walk alone.  And…

Video source
Posted by OLMC at 4:30 PM No comments: