Sunday Gospel Reflection, June 3, 2018: This is my blood of the covenant, which will be shed for many... 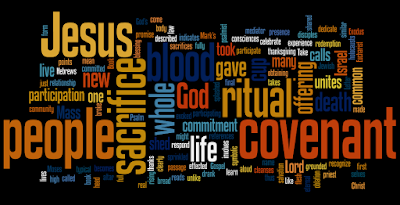 This is my blood of the covenant, which will be shed for many…
What does it mean to live in a covenant relationship with God?

In the Book of Exodus, Moses reads the book of the covenant aloud to the people. It is their first real experience of covenant, and it is grounded in a ritual that involves holocausts and sacrifices, after which blood is splashed on the altar and sprinkled on the people.  This common offering, an offering made by the community to God, unites them as a people under the law, and the people respond, All that the Lord has said, we will heed and do.  The people of Israel have thus, in ritual form, committed the whole of themselves, their life and their being, to God.  As such, their promise is not unlike the ritual commitment evoked in Psalm 116, in which the psalmist takes up the cup of salvation and calls upon the name of the Lord, offering a sacrifice of thanksgiving in the presence of God’s people.

We recognize a similar ritual in the sacrifice of the Mass, as described in Mark’s Gospel:  Jesus took bread, said the blessing, broke it, gave it to them, and said, Take it; this is my body.  Then he took the cup, gave thanks, and gave it to them, and they all drank from it.  Jesus clearly references the sacrifice typical of Jewish ritual in this passage, but here, he indicates that he is the new sacrifice: This is my blood of the covenant, which will be shed for many.  Jesus is, as the Letter to the Hebrews points out, the mediator of a new covenant, the one and final oblation.  Having shared a common cup with his disciples, Jesus becomes both high priest and sacrifice, obtaining our eternal redemption with his own blood.

When we celebrate Jesus’ death and rising, we are participating in the one sacrifice, in the very death of Jesus.  The Mass is not symbolic of that death; it is participation in it, and in the new covenant effected in his blood, in his flesh.  His is the blood that cleanses our consciences, that we might learn to participate fully in his life.  Like the people of Israel, we are called to dedicate our very lives, the whole of our being, to Jesus – Eucharist calls for just such a commitment of the whole of our selves to life in Christ.  It is what unites us as a people; through ritual, we come to live that covenant with God, with full participation, the whole of our life.

This post is based on Fr. Pat’s Scripture class.
Image source:  www.wordle.net

Email ThisBlogThis!Share to TwitterShare to FacebookShare to Pinterest
Labels: blood of the covenant, Exodus 24:3-8, Hebrews 9:11-15, June 3 2018, Mark 14, Most Holy Body and Blood of Christ, Psalm 116, Scripture Class, shed for many, Sunday Gospel Reflection

Ephemeral spectator of an eternal spectacle, man raises his eyes to the sky for but an instant, then closes them again forever; but, during that instant that is given him, from all the points in the sky and from the limits of the universe, a consoling ray departs from each, and comes to strike his gaze, to announce to him that there exists a relationship between that immensity and him, and that he is united with eternity.
--Xavier de Maistre,
Contemplation du ciel étoilé

In fullness is no static state of being
Nor yet suffices that container be
Enlarged for more grace by each grace’s giving
Its whole return in love to graced design.
By more expansion of you, Mary, danger
Of overspill grows greater with each pouring
From zest of God’s exuberant donation
Of grace where grace is fast absorbed and spent.
We come to save you, inundated Mother,
From floods of grace high rising in your soul.
Here with cupped hearts we kneel to beg a drenching.

Hail, Mary, full of grace, spill grace on us.