“Paul speaks of the new life ‘in Christ’ in the most extraordinary terms.  It is marked by freedom, joy, peace, and love, four of his favorite words:  freedom from the voices of all the would-be lords of our lives; the joy of the exuberant life; the peace of reconnection to what is, the peace that passes all understanding; and love – the love of God for us and the love of God in us.”

Marcus Borg, The Heart of Christianity:  Rediscovering a Life of Faith

Photo source
Posted by OLMC at 6:00 AM No comments:

The Puzzle of the Chiasmus

This Sunday’s reading from Revelation is a bit like a puzzle, because it’s arranged in a very particular way – as a chiasmus – in order to highlight a special theme.  The word chiasmus is based on the Greek letter X (chi, as in the “chi-rho” that is used to represent Christianity in the image above), and so a chiasmus happens when you have elements in a sentence arranged in a kind of “X” form.  For example:

Advertisers and politicians are fond of this form because a chiasmus tends to stick in people’s brains; recall John F. Kennedy’s “Ask not what your country can do for you, ask what you can do for your country.”  (Mae West was fond of them, too:  “I’d rather be looked over than overlooked.”)

We find examples of chiasmus in the Bible as well:  “Whoever exalts himself will be humbled, and whoever humbles himself will be exalted” (Matthew 23: 11-12).  But a chiasmus can also have multiple elements, creating a kind of series of overlapping X’s; this week’s reading from Revelation is an example of that:

a.  a new heaven and a new earth
b.  former heaven and former earth had passed away
c.  the sea (i.e. chaos) was no more
d.  the holy city is God’s bride
d.  God’s dwelling is with the human race
c.  no more death or mourning
b.  the old order has passed away
a.  “Behold, I make all things new.”

If you arranged these in two parallel lines and connected like letters, you would have 2 crosses or X's made of 4 crossing lines:

In the example from Revelation, the most important element is the central one:  the focus is on the marriage-like union of God with humanity, where humanity serves as the bride and God dwells with us.

Why use such a complicated form?  Well, recall that most Biblical texts were first part of an oral tradition, which meant that “tricks” like chiasmus could be very helpful in helping speakers remember all the little bits of the Word they were to proclaim.  In the case of the author of Revelation, the message is a very important one indeed:  God is with us, now and always, thanks to the new order established by the death and rising of Jesus.  It is a message to celebrate, once we’ve cracked the puzzle of the chiasmus!

So where is Pisidia again?

A Map of the Apostles' First Mission

Contrary to what you may have heard, Pisidia is not the destination for OLMC students participating in the High School Leadership & Service trip this June!!  But it is on the long list of places the apostles visit during their first mission to Asia Minor.  Both last week and this coming weekend, we hear about the apostles' first mission to share the Good News with communities as distant from each other as Antioch in Pisidia, Cyprus, and Antioch in Syria. (Yes, and to confuse us completely, there are two different Antiochs involved!)  To get a better sense of the distance traveled by Paul, Barnabas and John (and to locate Pisidia!), click on the map above and reread Acts 13:4 to Acts 14:28.

Photo source
Posted by OLMC at 6:00 PM No comments:

What is the quality of the love Jesus requires of us?

Love one another... [as] I have loved you, he says in our Gospel from John this week.  A daunting task!  Jesus loved us to his death, facing the ultimate pain and suffering, loving humanity with intensity, revealing a love we have yet to understand, a love without limits, a love that conquers death, a love that heals and transforms and makes all things new.  Indeed, the love he proposes is itself new:  it is the new power, the only power, that can bring all humankind together.

The Old Testament certainly was not bereft of a sense of God’s love for the world, though it was expressed a little differently, in covenant language.  We see this in Psalm 145, which speaks of love that God extends to all the children of Adam, as he is compassionate toward all his works, showering them with goodness and graciousness and mercy.  But the coming of Jesus will transform even that notion of love…

In our reading from Acts, it is the love of Jesus that makes Paul and Barnabas travel countless miles and undergo many hardships, meeting resistance everywhere, to proclaim the faith and establish churches.  In fact, their very mission is to encourage love, to urge others to let love guide their very lives.   They do this by loving other, and by sharing the message of love with all they meet.

And the very newness of this love proclaimed by the disciples is what calls us also to change, to transformation, to love.  Jesus’ suffering leading to his death was the process by which all things were made new.  Just as Jerusalem is transformed in the Book of Revelation, becoming a new Jerusalem, so does the love of God make us new, transforming us through a new level of intimacy:  God’s dwelling is with the human race.  We are thus to be the bride adorned for her husband, ready to accept God's love.  It is this love, ever renewed, ever renewing, to which we must open our hearts, so that we can embrace the closeness with God that is our gift through the sacrifice and glorification of Jesus on the cross, so that we, too, can love one another as Jesus loved us.

This reflection is based on Fr. Pat's Scripture Class.
Photo source
Posted by OLMC at 6:00 AM No comments: 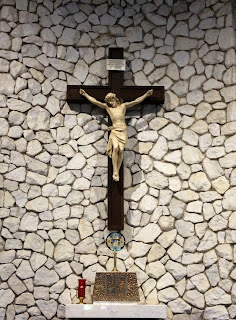 What is Adoration of the Blessed Sacrament?

As Catholics, we believe that once the bread and wine are consecrated, “Christ himself, living and glorious, is present in a true, real, and substantial manner: his Body and his Blood, with his soul and his divinity (cf. Council of Trent: DS 1640; 1651).[1] Therefore, when “Christ himself is present in the sacrament of the altar, he is to be honored with the worship of adoration.” [2] Adoration of the Blessed Sacrament is an opportunity to have an intimate time with God. What can we do during Eucharist Adoration? We can pray our favorite prayers, read the Bible, or simply remain in silence accompanying God, as if we were with one of our dearest friends.
In those moments of closeness with God, we might feel called to thank Him for the countless blessings He bestows upon us. Maybe we feel grateful for our good relationships with members of our family, relatives and/or friends; work success; peace and joy in our hearts; health; prosperity; love for life, and so on. Giving thanks to God helps us to realize how blessed we are and that indeed, God is with us …
Another way of spending time before the Blessed Sacrament is to bring to God our personal and other people’s petitions. It is a consolation to remember what Jesus told us, “Ask and it will be given to you; seek and you will find; knock and the door will be opened to you. For everyone who asks receives; the one who seeks finds; and to the one who knocks, the door will be opened” (Mt. 7, 7-8). When we are before Him and embracing His peace, it is easier to think about others, the sick, the poor, the vulnerable, the lonely, the sad, etc. Our heartfelt prayers for those who are in most need of God’s mercy are the kind of prayers that start changing people’s lives, and therefore the world. Jesus invites us to be compassionate and to help others; being mindful that every time we do so, we are doing directly for Him, “Truly I tell you, whatever you did for one of the least of these brothers and sisters of mine, you did for me” (Mt. 25, 40).
Before the presence of God, we could also open our hearts and share with Him our most intimate secrets or experiences that we wouldn’t share with anybody else. In this moment of Adoration it is only you and the Lord in a loving atmosphere. Anything you share with Him will remain in Him, and God will never let you go with empty hands. He will most likely heal you, teach you, or grant you the peace you have being longing for … Always remember that beyond all the conceptions and understanding we have about God, He is most of all a loving, merciful, forgiving and always present God …
(Text & photos contributed by Daniela Picazo)

Join us on Tuesdays for Adoration of the Blessed Sacrament
at Our Lady of Mount Carmel, Mill Valley! 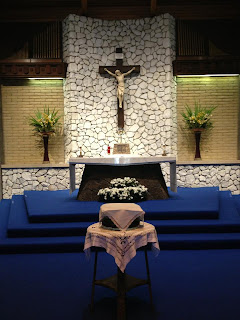 Sometimes it’s quite the challenge to try to visualize in literal form the images that come to us in the Book of Revelation.  This weekend we heard about the Lamb that will shepherd those who worship him, and lead them to springs of life-giving water.  That sounds like a fairly innocuous image, right?

But our lectionary leaves out the description of the Lamb himself.  What form does this Lamb take?  In his guided tour of the New Testament, Fr. Felix Just, S.J., notes that the “lamb who appears [is] not a cute little lamb, as we might imagine, but a lamb that has seven horns and seven eyes and looks like it had been slain and yet was standing and alive [Revelation 5]."  Fr. Just goes on to explain that, "This lamb is identified with the lion of the tribe of Judah, the root of David who has conquered, imagery clearly referring to Jesus, who, although he died, in Christian belief, rose again from the dead.  But why seven horns and seven eyes? [The] seven horns represents the perfection of power.  In other words [Jesus] is all-powerful.  Whereas seven eyes represents the idea of being able to see everything, or to be all-knowing.  But who is the only one who is omnipotent and omniscient, all-powerful and all-knowing?  It is God himself.”

The Book of Revelation clearly links the striking imagery of the Lamb, in chapter 5, back to imagery used for God in chapter 4, where God is depicted as an ancient one on his throne.  Both God and the Lamb are worshipped by the twenty-four elders and the four living creatures and myriads of angels.  The image is a powerful reminder to readers of Jesus’ own divinity, Jesus, the Lamb who shepherds us, source of the life-giving water that is God's grace.