Two Keys and a Crown

Have you ever wondered what’s on the flag that hangs to the right of the altar?

In fact, it’s the flag of Vatican City, adopted in 1929 when Pope Pius XI signed a treaty with Italy creating a new independent state under the government of the Holy See.  The flag has two vertical bands:  gold on the left and white on the right.  The white side also bears the symbols of the Pope as successor to Peter:  two Keys (one gold and one silver) surmounted by the Papal Tiara, a kind of triple crown last used by Pope Paul VI.  The keys, of course, make reference to Jesus giving Peter the keys to the kingdom of heaven in Matthew 16:19. The popes are considered successors to Peter, and the gold key represents spiritual power, while the silver key represents worldly power.  They are joined by a red cord.

You will often see this flag flown in Catholic churches alongside or juxtaposed with the flag of the country where the church is located. But who do you say that I am?

This weekend, we celebrate the Solemnity of Saints Peter and Paul with a series of readings (for the Vigil and for Sunday) that point to the absolute centrality of Jesus in the lives and actions of both of these martyrs.  But who do you say that I am? Jesus asks Peter in Matthew's Gospel.  Our readings give us a sense of the response to that question for both Peter and Paul, as they worked to grow the early Church, preaching and teaching and drawing new disciples to Jesus Christ.

For Peter, the response is clear:  You are the Christ, the Son of the Living God, he tells Jesus.  Jesus knows that it is God Himself, my heavenly Father, who has revealed Jesus's identity to Peter, because Peter has opened himself to knowing the intangible; he knows who Jesus is with his heart, because he has allowed God to speak to him.  Peter is not perfect:  when Jesus is arrested, Peter denies him three times.  But Jesus offers Peter a way to make up for this betrayal, asking him (again, three times) at the end of John’s Gospel, Simon, Son of John, do you love me?  Peter not only responds to that love; he will later allow God's healing powers to work through him, enabling the crippled man in Acts 3 to walk and praise God. In his own time of need, Peter himself will be rescued by the angel of the Lord (Acts 12) and will sing the Lord’s praises, as had the psalmist before him:  I sought the Lord and he answered me, Psalm 34 tells us. For Peter, Jesus Christ is both the origin and the object of love, divine and revered, a source of healing power and strength in times of difficulty.  And upon this rock Jesus builds his church.

For Paul, Christ is a revelation and a just judge:  God revealed his Son to Paul when, as Saul, he was persecuting the church, a zealot for his ancestral traditions.  Why?  Paul understands quite clearly:  so that I might proclaim Jesus Christ to the Gentiles, he tells the Galatians.  For Paul, as for Peter, Jesus is the focal point, the source of his identity, the bearer of the gift of salvation, our crucified Messiah.  Paul’s charismatic vision has allowed him to become a preacher par excellence, a voice of strength whose message -- the Good News of salvation -- goes out through all the earth (Psalm 19, read from a Christian perspective).  Mindful of his impending death, Paul tells Timothy that he has kept the faith, confident that Jesus will bring [him] safe to his heavenly kingdom.  Paul, poured out like a libation, trusts that the Lord will give [him] strength.

Both rescued, both sent, Peter and Paul have to answer for themselves the question, who do you say that I am? As do we: our search for an answer to that question is played out every day of our lives.  Whether we identify Jesus with the foundational solidity of Peter, or with the charismatic vision and preaching of Paul, our daily engagement with that question – Who do you say that I am? – gives meaning and purpose and direction to our lives.  May we, like Saints Peter and Paul, be open to all that Christ can be, a source of strength and radiant joy, now and always. 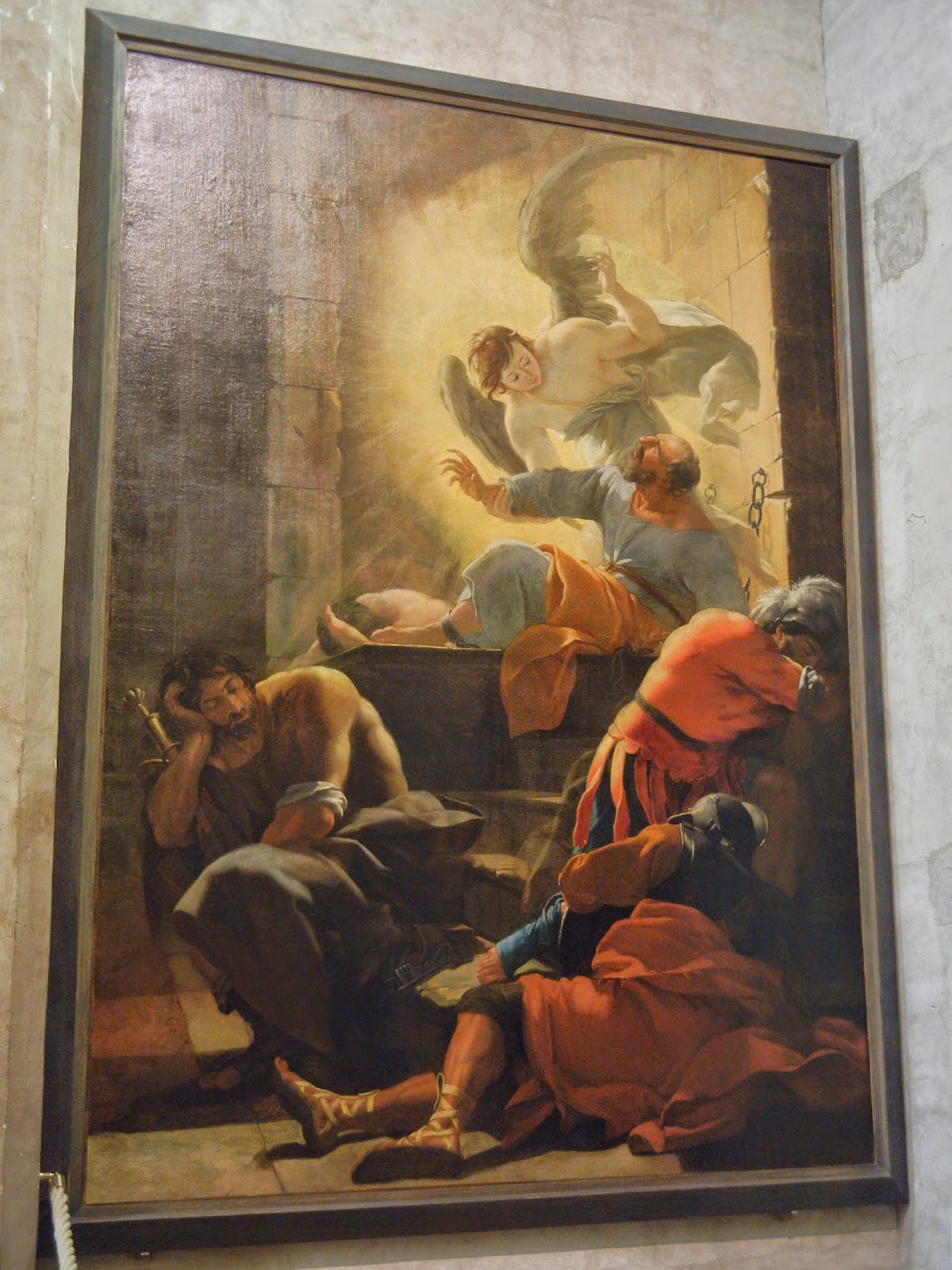 The cup of blessing that we bless...

Why receive Holy Communion under both species,
the Sacred Host and the Precious Blood?

We in the United States are particularly blessed by the opportunity to receive Holy Communion under both species.  And, while the Church teaches that by partaking of either one or the other of the forms of Holy Communion, one receives the fullness of the grace of the Sacrament of Eucharist, we are nevertheless encouraged to receive under both forms.  Why?

First, think about how many stories of Jesus depict him eating and drinking with his disciples.  The experience of eating and drinking (one event) has a particular resonance when it is shared in community; as such, the union of that community becomes communion,  a way of entering more deeply into relationship with Jesus and with His Body, the community of believers.

The Catechism of the Catholic Church tells us that, In the Eucharist, Christ gives us the very body which he gave up for us on the cross, the very blood which he poured out for many for the forgiveness of sins.  Hence, the Church says that, The sign of communion is more complete when given under both kinds, since the sign of the Eucharistic meal appears more clearly.  The intention of Christ that the new and eternal covenant be ratified in his blood is better expressed, as is the relation of the Eucharistic banquet to the heavenly banquet (General Instruction of the Roman Missal, n.240).  Sharing in both Eucharistic forms thus has value in that it reflects more completely the nature of Jesus’s sacrifice in terms of both Body and Blood, as well as the banquet that is to come.

At the Last Supper, Jesus invites his disciples to take and eat, but also to take and drink.  Together, they allow us to enter more deeply into his sacrifice and his gift, the sacred Meal, body and blood, that is Eucharist.

For more information on the Sacrament of the Eucharist, check out Fr. Stephen Bell's awesome video, "Sacraments 201:  Eucharist" on the Busted Halo website.

Image source
Video source
Posted by OLMC at 6:00 AM No comments:

The one who feeds on me will have life because of me...


What does it mean to say, I have life?

When Paul attempts to explain the significance of the Body and Blood of Christ to Christian worshipers in Corinth, he begins by drawing on lessons that they already know.  Through their experience of Passover, the Corinthians know how central bread and wine are to the seder meal:  Jews bless both the bread and the cup before they partake of this communal repast.  Likewise, Paul suggests, Eucharist is a sacred meal that joins Christians together in prayer – it is a part of our communal journey, this participation in the body and blood of Christ.  The Body of Jesus feed us; the Cup is a symbol of our salvation and of God’s blessing on us.  It is God’s way of taking care of us, just as he did for the people of Israel as they survived for forty years in the desert on the way to the Promised Land:  Do not forget the Lord, your God,… who brought forth water for you from the flinty rock, and fed you in the desert with manna… The proof of their desire for renewed relationship with God lies in their praise and worship:  Glorify the Lord, O Jerusalem, Psalm 147 proclaims.  And, just as God fed the Israelites in Deuteronomy, he continued to feed the people of Corinth, as he continues to feed us, today.

But our cooperation, like theirs, is necessary.  The Israelites were tested by affliction and so learned to say yes, to prove that they were worthy to be a part of God’s plan, to be in right relationship with God as they entered the Promised Land.  We, too, seek a Promised Land:  eternal life, with Jesus, in heaven.  In John’s Gospel this week, Jesus says, in essence, I have given myself for you.  Now it’s up to you to respond, to say yes!  If we participate in the Body of Christ, if we, though many, are one body, we will be transformed...  if, that is, we come together as a community at Mass, praying together, participating in something larger than ourselves, assembling to hear God’s Word, and to receive Jesus’s Body and Blood – thus receiving life.

The one who feeds on me will have life because of me, Jesus says.
Would you like to have life?
Then partake of the cup of blessing, and the bread we break….
Join us at Our Lady of Mount Carmel for Eucharist! 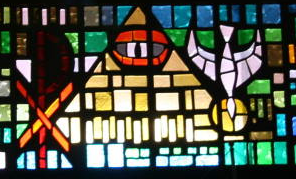 Have you ever noticed that the stained glass windows around our church represent all of the major days and seasons of the liturgical season?  This week we celebrated Trinity Sunday, and the related window is pictured above.  You may have noticed the triangular form (a giveaway), but are you familiar with the other elements portrayed in this window?

At the top of the triangle, we have the Eye of God, most often depicted with rays of light or glory emerging from it, a symbol of God’s omniscience and omnipresence:  God is all-seeing, all-knowing, and ever-present in our lives.  (This symbol can also be found on the dollar bill.)  To the left of the Eye is the Chi-Rho symbol, two Greek letters (X and P) superimposed one on the other, the first two letters of XPIΣΤΟΣ, the Greek word for Christ.  The crossed X evokes the Crucifixion, but represents as well the Word of God extended infinitely outward to all the nations.  And finally, we see a dove, symbolizing the Holy Spirit, as it is depicted in two of the narratives of Jesus’s baptism (in Matthew and Luke); the dove is also symbolic of the peace Jesus wishes upon the disciples as he breathes the Holy Spirit upon them at Pentecost.

Image source
Posted by OLMC at 11:21 AM No comments: