Thy Most Holy Mother

O sweet Jesus!  what dreams must thy most holy Mother have had when she slept, while her heart watched?  Did she not dream that she had thee yet in her womb, or hanging at her sacred breasts and sweetly pressing those virginal lilies?  Ah!  what sweetness was in this soul!  Perhaps she often dreamed that as Our Saviour had formerly slept in her bosom, as a tender lambkin upon the soft flank of its mother, so she slept in his pierced side, as a white dove in the cave of an assured rock:  so that her sleep was wholly like to an ecstasy as regards the spirit, though as regards the body it was a sweet and grateful unwearying and rest.  But if ever she dreamed [….] of her future greatness… or if ever, like Jacob, she saw the progress and fruit of the redemption made by her Son, for the love of the angels and of men; --… who could ever imagine the immensity of so great delights?  O what conversations with her dear child!  What delights on every side!

Holy Family Sunday is meant to remind us that God has always and always will desire to be in relationship with us.  This song, by Dan Fogelberg, encourages us to remember that God's eternal love stretches not only far, far into the future, but also back to the beginning of time, meeting us in the here and now with all its power and intimacy.

Longer than there've been fishes in the ocean,

Higher than any bird ever flew,
Longer than there've been stars up in the Heavens,
I've been in love with you

With thanks to Fr. Eunan McDonnell for suggesting this meditation in God Desires You.
Video source
Lyrics source
Posted by OLMC at 6:00 AM No comments: 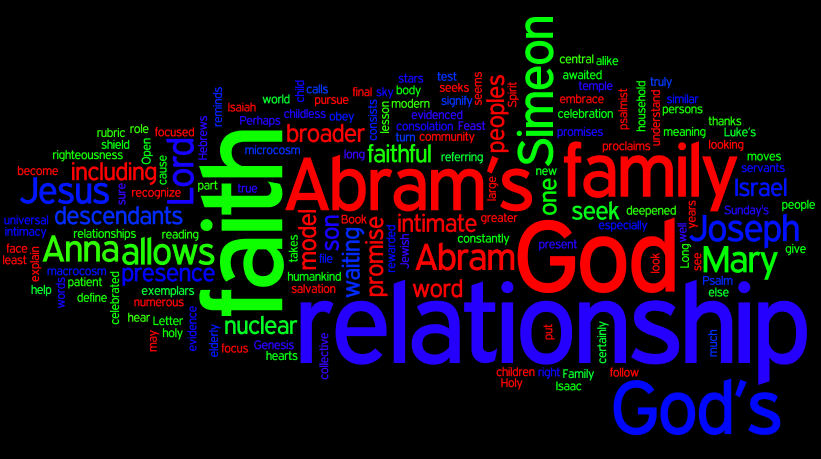 By faith...
How do you define family?

Long before the word family came to signify parents and their children, its meaning was much broader, referring to a collective body of persons forming one household, including relatives and servants alike.  This context may help to explain the readings we hear for this Sunday's Feast of the Holy Family, where, while Jesus, Mary and Joseph certainly do play a central role, a broader sense of the word, one focused especially on relationship through faith, is called for.

We begin with God’s promise, in the Book of Genesis, to the childless and elderly Abram that Abram’s descendants shall be as numerous as the stars in the sky... because Abram has faith, a faith that will become a model of righteousness for generations to follow.  To be sure, Abram’s new nuclear family is cause for celebration, but the true focus here seems to be Abram’s right relationship with God, an intimate relationship in which God proclaims himself to be Abram’s shield.  It is relationship that Abram’s descendants should pursue as well, as evidenced by Psalm 105:  the psalmist calls upon the people of Israel to give thanks to the Lord, look to the Lord, constantly seek his face. God seeks a relationship with us; we, in turn, are to be hearts that seek the Lord, in faith.  And it is ultimately Abram’s faith, as the Letter to the Hebrews reminds us, that allows him to obey God’s call, offering up his son Isaac when put to the test.  Abram is the model of intimate relationship with God through faith.

We have similar exemplars of faith in our reading from Luke’s Gospel.  Both Simeon and Anna have long awaited the consolation of Israel, looking for evidence of God’s presence, and promise, to the Jewish community.  When Mary and Joseph, faithful Jews, present their son Jesus at the temple, the Spirit moves both Simeon and Anna to recognize that their waiting—a patient waiting that has ever deepened their relationship with God—has been rewarded.  Open to God’s presence, faithful until their final years, Anna and Simeon see God’s salvation for all the peoples embodied by the child whom Simeon takes into his arms.

What is the lesson here?  Perhaps, at least in part, we are to understand that, before all else, it is our relationship with God, God our father (Isaiah 63), that allows all other relationships to flourish, including those we file under the modern rubric of family. It is our intimacy with God through our faith in God’s promises, in other words, that allows us to embrace, not only our own nuclear families, but a universal relationship with all peoples, with that greater family that consists of humankind at large, truly a holy family to be celebrated, both  in the microcosm that is Jesus, Mary and Joseph, and in the macrocosm that is our world.

Image source:  Wordle
Posted by OLMC at 6:00 AM No comments:

When the Son of Man is begotten in us

Image source
Quote source & Fr. Pat's "From the Pastor's Desk"
Posted by OLMC at 6:00 AM No comments: 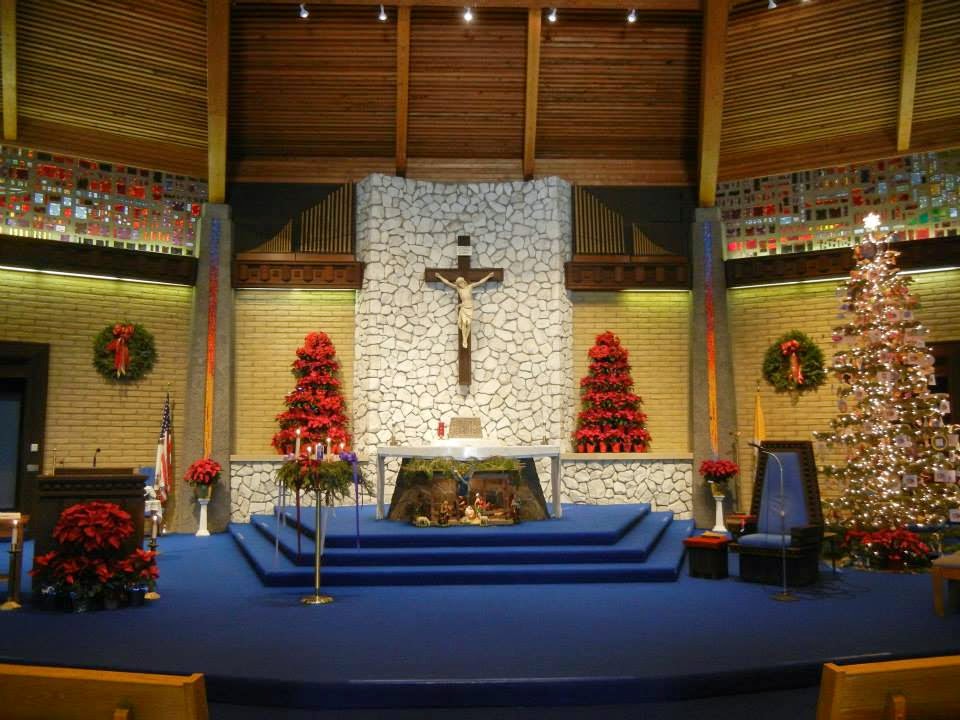 Our Lady of Mount Carmel Mill Valley
wishes you and yours blessings at Christmas!

If you're one of the lucky ones who can come to church on the weekdays leading up to Christmas, you will hear in the daily readings not only the story of Jesus, but also that of the birth, naming, and circumcision of John the Baptist, who will be charged with preparing the way of the Lord.  John's father Zechariah loses his ability to speak when he expresses doubt before the angel Gabriel, but on the day of John's naming and circumcision, Zechariah regains his speech, and the people all around begin to understand that John will play an important role in salvation history...

What does this have to do with musical notes?  Well, we’re all familiar with the scene in The Sound of Music when Maria and the children dance around a statue, singing Do-Re-Mi… The children believe that the syllables are nonsense sounds that don’t actually mean anything, but in fact, their origin is fascinating:  they come from medieval choral music and are taken from the first six phrases of a hymn to St. John the Baptist that reminds us of the circumstances of John's birth.

The Latin words, Ut queant laxis, Resonare fibris, Mira gestorum, Famuli tuorum, Solve polluti, Labii reatum, may be translated as So that Your servants may sing at the top of their voices the wonders of Your acts, absolve the fault from their stained lips.  These words were apparently written by the monk Paolo Diacono (Paul the Deacon) in the eighth century.  Later, in the tenth or eleventh century, another monk used the first syllables of these phrases – ut, re, mi, fa. sol and la – as names for the six tones ranging from C to A; the ut was later replaced by a sound that was easier to sing (do), another syllable (ti) was added to complete the scale, and sol was shortened to so, for uniformity’s sake.

O for your spirit, holy John, to chasten lips sin-polluted, fettered tongues to loosen;
So by your children might your deeds of wonder meetly be chanted.

Lo!  a swift herald, from the skies descending,
Bears to your father promise of your greatness;
How he shall name you, what your future story, duly revealing.

Scarcely believing message so transcendent,
Him for a season power of speech forsaketh,
Till, at your wondrous birth, again returneth, voice to the voiceless.

You in your mother’s womb all darkly cradled,
Knew your great Monarch, biding in His chamber,
Whence the two parents, through their offspring’s merits, mysteries uttered.

Praise to the Father, to the Son begotten,
And to the Spirit, equal power possessing,
One God whose glory, through the lapse of ages, ever resounding.
Amen.

You can hear the Hymn to John the Baptist by clicking on the video above, or by clicking here.

Fr. James Martin, S.J. takes the Annunciation image above, two statues by the 14th-century gothic sculptor and artist Marco Romano of Siena, as his point of the departure for a reflection on the place of surprise in Mary's encounter with Gabriel, and our own surprise when God asks us to act in our own lives.  Do we say yes?  To hear Fr. Jim's reflection, click here!

Image source
Video source
Posted by OLMC at 6:00 AM 2 comments:

Even if I don’t see it again – nor ever feel it
I know it is – and that if once it hailed me
it ever does –
And so it is myself I want to turn in that direction
not as towards a place, but it was a tilting
within myself,
as one turns a mirror to flash the light to where
it isn’t – I was blinded like that – and swam
in what shone at me
only able to endure it by being no one and so
specifically myself I thought I’d die
from being loved like that.
--Mary Howe
Image source:  Fra Angelico, Annunciation
Poem source
Posted by OLMC at 6:00 AM No comments: