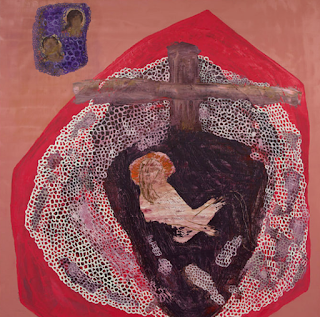 In 2009, the Catholic artist Alfonse Borysewicz was inspired to create a series of three paintings representing the Triduum, that period of three days that commemorates Jesus’ last moments, from the Last Supper to the Resurrection.   The genesis of the resulting work is fascinating in its expression and exploration of the artist’s deep faith, in particular as he tackled the task of representing Good Friday and Holy Saturday.

Borysewicz’s trademark image is a deflated hexagon, related to the shape of a honeycomb.  To create this particular work, Borysewicz chose to represent the tomb with such a hexagon, yet painted Jesus’ face over the entrance.  Coming back to the work a few months later, Borysewicz decided, he says, to efface the face, replacing it with a red Pièta and softening the outline of the face to an oval, which, over time, was transformed into the shape of a skull.

Fully a year later, Borysewicz removed the canvas from the wall and reintroduced the body of Jesus, though not, for the most part, the Virgin Mary.  The skull was transformed into a representation of the sacred heart of Jesus, albeit black, swathed in a honeycomb, what David Van Biema has called, Borysewicz’s personal symbol of community and hope.  A cross in the upper left corner has now become two angels.  And voilà:  as Van Biema notes, It is no longer a Holy Saturday painting.  It is Borysewicz’s own variation on life out of death through Jesus, untethered from the specifics of the sacred calendar.

Evolution is at the heart of the Triduum.  Join us this week and see where your reflections on Jesus’ Last Supper, Passion, Entombment and Rising take you…

To see all of the different stages of this painting,
and to read David Van Biema’s complete article
(on which this post is based), click here.